What to do with a desiccated lemon 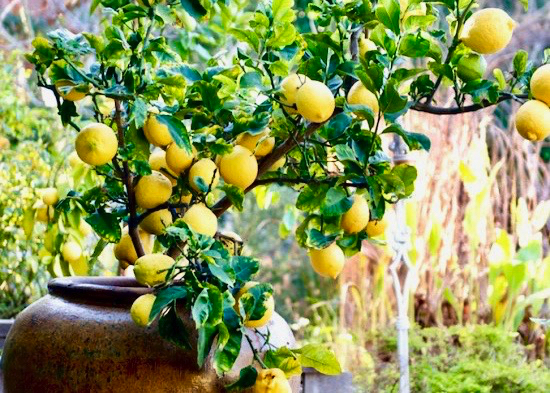 A breath-taking spring morning here in the Garfagnana, home to The Factor House – the type that starts with an unmistakeable dewy freshness, but is full nonetheless of the promise of a balmy afternoon – finds me staring forlornly at a stylish arrangement of twigs in a handsome terracotta pot.  Not an as yet untested and contemporary approach to Tuscan garden ornamentation, but the despondent remains of a previously robust lemon tree, the leaves stripped by a single night’s unexpectedly bitter wind which swept down unannounced from the majestic snow-tipped Apuan Alps opposite – mockingly visible on this pellucid crisp morning.

For hitherto winter had remained unseasonably warm and we had repeatedly deferred the arduous task of dragging the terracotta pots – we have six, each well on the way to a metre in diameter – into the shade and protection of a overhanging balcony, which, in the absence of anything more apposite and with the help of metres of protective garden fleece, acts as our limonaia (an orangery, but for lemons).  The tragedy is repeated too, not without some monotony now, on the trees of five other pots arranged sentinel-like along the edge of the sun-drenched terrace.  By some strange twist of fate – and adding to the other-worldliness of the twig arrangements – the majority of the lemons have survived, though they’re noticeably malleable, having, I suppose, been quick-frozen and slowly defrosted in the space of one evening.  They will need to be used quickly, for I’m sure – once removed from the branches – that they won’t survive long.

A noise behind me interrupts my reverie and contemplation of a lemon-free spring.  It’s the postman, and husband of the industrious and well-informed woman who runs our local bar.  He’s grimacing, shaking his head and tutting, a typical response to so many things in these parts.  But, when interrogated, he’s confident that the trees are salvageable – not without some relief on my part, because we’ve successfully nurtured them for four years and they were fruiting beautifully.  But it’s going to require a vicious prune to remove any hint of desiccated lemon plant, and then coddling for a season (there are those locally that, with much wise nodding of seasoned heads, advocate engaging the trees in conversation too) to return them to vigorous health.  We head back to the bar together for a contemplative caffè (the generic word for coffee, but actually meaning an espresso, much like formaggio is the generic name for cheese, but in a restaurant actually means grated parmesan).  Once there he opens the glazed doors to his cantina (a multi-purpose cellar underneath most country houses around here) and – not without some pride – shows me a room full of healthy lemon trees, verdant and weighed down by innumerable fruit.  Perhaps my spring will not be so devoid of lemons after all, I think.  We strike a deal, bartering being as much part of everyday life here as the restorative caffè.  A free supply of lemons – just until my trees are back to form – in return for some of my legendary limoncello, made therefrom.  Seems eminently reasonable to me.

The secret to my legendary limoncello is to use the smoother grappa – a spirit distilled from pomace (all the bits left over once grapes have been crushed for winemaking) – instead of the viciously astringent supermarket-bought 98° proof alcohol typically used in these parts.

You’ll need a couple of 50cl bottles of grappa – I use chardonnay grappa, for a rounder final flavour – plus another empty bottle.  Divide the litre of grappa evenly between the three bottles (33cl in each).  Soak half a dozen average sized lemons overnight in a bowl of water to soften the skin.  Remove from the water, dry and then remove the zest with whatever implement you have to hand (I use a microplane grater, which maximises the surface area of the zest, all the better to flavour the grappa).  Divide the zest evenly between the bottles – easier than it sounds, if you use a funnel and a skewer to push clumps of zest into the bottles – seal and then give each bottle a good shake to mix.  Leave for a month, agitating occasionally.

All that’s now needed is to sweeten the liquor.  Take each bottle and pour the mixture through a fine sieve to remove the zest.  Pour the lemon grappa back into the bottle and top up with sugar syrup.  This is readily available in supermarkets – typically as a sweetener for cocktails – but is also easily made by dissolving one part white sugar into two parts water (for example, 250g sugar into half a litre of water).  Seal the bottle, shake well to mix, and store in the freezer until ready.  Salute!