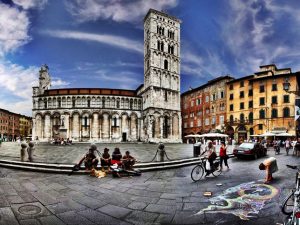 In the words of author Hilaire Belloc: “The neatest, the regularest, the exactest, the most fly-in-amber town in the world, with its uncrowded streets, its absurd fortifications… everything in Lucca is good”. For those that have already sampled the beauty of Florence, imagine a similarly captivating renaissance town, but without the crowds and of a far more manageable size. From the moment you traverse the “absurd fortifications” – 4km of fortified walls which encircle the city and which can be explored on foot, or on bikes (rented locally) – and enter the historic centre, you are plunged back in time to cobbled streets lined with handsome palazzi, and cafés and restaurants spilling out onto piazze large and small – and, in the case of Piazza dell’Anfiteatro, oval! Visit the spectacular Romanesque Cattedrale di San Martino, with its volto santo, or life-sized image of Christ on the cross. Take in some opera, with a visit to the childhood home of Giacomo Puccini, composer of well-known operatic favourites such as La Boheme, Tosca and Madame Butterfly. For the energetic among your party, why not scale the 230 steps of the 45m Torre Guinigi, the red brick tower adjoining Palazzo Guinigi, for a birds-eye view of the city.  Try and fit in a little shopping: Lucca is renowned for the wide variety of quality shops – particularly in and around the Via Fillungo – both recognisable high-end labels but also many quirky independents.  Finally, take the weight off your feet and treat yourself to a well-deserved glass of the excellent local Colline Lucchesi wine. Salute! 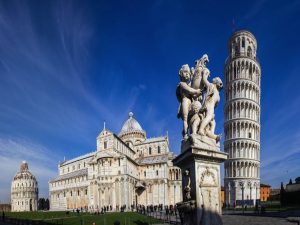 More than just the site of the infamous leaning tower, Pisa has at times been a maritime power to rival Venice, and is home to a world-leading centuries-old university. All this gives Pisa a sense of importance and permanence beyond its principal tourist attraction, and good reason to explore further.  In the same expansive UNESCO-listed Piazza dei Miracoli as the leaning campanile (bell tower) – and often sadly overlooked – are the spectacular Romanesque 11th century Duomo (cathedral) and multi-domed Battistero (baptistry), in which Pisan scientist Galileo Galilei was baptised in the 13th century. Alongside is the beautiful Camposanto cloistered cemetery. A comfortable wander from the campo, Pisa abounds with spectacular architecture, a medley of mediaeval and renaissance palazzi and chiese, attesting to the significance of its past. 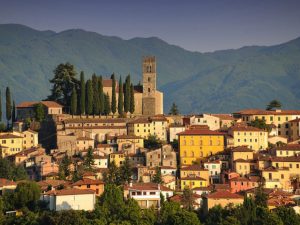 On the next hill along from The Factor House is Barga, an entrancing mediaeval Tuscan hill town and one of Italy’s Borghi Più Belli. Once within the walls, lose yourself in the winding – almost secretive – narrow streets heading ever higher to the 11th century Romanesque Duomo at the summit, with its wooden sculpted San Cristoforo, Della Robbia ceramics and 12th century fantastical pulpit.  From here the views are spectacular, both of the terracotta-tiled roofs of the town below and of the enclosing alps: see if any snow remains on the summit of Monte Pania della Croce and spot Monte Forrato, a great stone arch to the east and part of the face of l’Uomo Morto, a reclining figure formed from the mountain ranges.  Stop for a slow-food lunch in one of the excellent and well-priced ristoranti, showcasing the best that the breathtaking Garfagnana region has to offer, before grabbing a gelato and wandering down to Il Giardino, the newer part of Barga (though still a couple of hundred years old) formed when Italian emigrants (many to the east coast of Scotland) returned home in the 19th century.  Here the graceful Liberty villas that they built are a backdrop for the regular Saturday market, and a chance to sample all manner of the freshest fruit, vegetables, cheese and salami produced locally.  In the summer Barga is awash with music, including Opera Barga, the world-renowned Barga Jazz, Bel Canto in Barga – with concerts of operatic favourites, Neapolitan songs and sacred music, plus the two-week Festa del Centro Storico bringing the historic old town to life with two weeks of gastronomy, live music and literary events. A summer not to be missed! 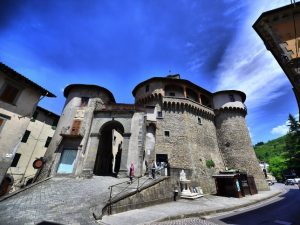 Just on the doorstep, at the point at which the Serchio river meets its smaller tributary, the Turrite, sits the town of Castelnuovo di Garfagnana, with its unmistakeable Rocca Ariostesca 12th century castle towering over the centre.  The main market town in this part of the Garfagnana, a visit to the Thursday market is a must.  A multitude of stalls are sited everywhere, in the main piazza – where on other days you can sit in one of the piazza cafés with a cappuccino and watch the busy town in action – and throughout the mediaeval old town, now home to a good selection of shops, including a delicatessen stocking local Garfagnana specialities – including the local chestnut and farro (a type of spelt) beers – and an enoteca (wine shop). The Fronte della Rocca historic cake-shop has been making chocolate since the 19th century.

For a fuller list of all activities, both local and a little further afield, or to discuss your requirements, speak with Leigh (details on the Contact page).
Back to top